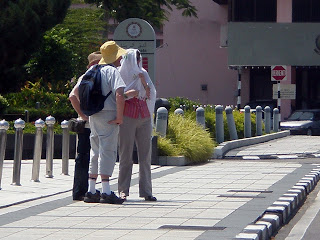 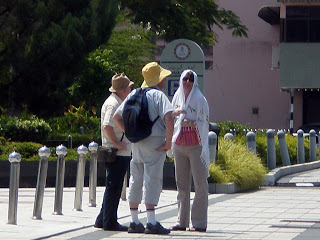 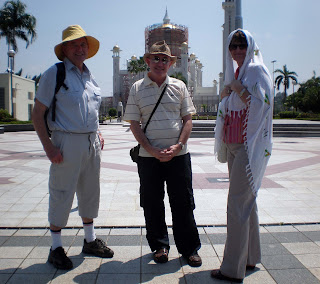 Pecaya me ah.. buleh kah nda betanya where they are from??? lah.. Dari jauh me nampak lepas makan tengah hari and on the way to work.. What caught my attention, the beautiful white scarf under the sun tadi was so berseri. Chantek.
I took from far, then as i get closer, i turunkan my window, and asked if i can take their picture.. and yes, i got green light lah. I greeted them and wish them a good day selepas i took the gambar. Suka ku eh yang me lupa to ask where they from. Maybe staying in Brunei for few days or may be just transit.
Nowdays kan ada flight yang transit saja here, and ada bus kena provide untuk round Bandar Brunei. Kalau transit more than two hours, then kena bawa round town. Fantastik kan. At least kalau inda stay here pun, bila they go back to country nya masing masing, they can cerita with kawan kawan nya about Brunei.
Brunei is a beautiful country. Peaceful lagi. At least they woun't think of Brunei as a jungle saja. Since we are in Borneo, some think that our place is jungle only. For Urang Utan and monkeys and sewaktu dengan nya. So bila they got to see the Bandar and the people.. nice one too like me and you..(he5) then the story would be different.. kan..kan....
Posted by zura at 8:45 PM