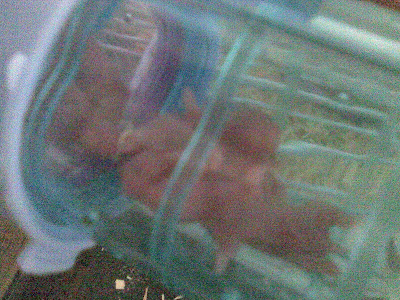 THIS IS SPICE PUNYA BABIES. Guess what??? That night i got the HOW TO CARE FOR NEWBORN HAMSTERS kan.. so i lupa to tell Luqman not to touch the babies. And apa nah???? He got home, immediately open the tube atu, and took one of the babies. And showed it to his grandma. Adoi!!!!

When i call to talk to him, he said he took one of that babies and place it on his palm. Apa lagi i told him, the mummy going to eat that one. And sedih Luqman tarus. I came home to kiss him goodnight, he tebangun. And i asked him, but he looked sedih. And ask me why mummy nya like that???? I told him that kalau he touch the babies, then the babbies smell like Luqman and the mummy woun't recognise her newborn kan... kan menitik air mata nya. Jahat jua mummy nya kan makan anak anak nya.

I wonder what's in his mind ah??? Cian eh. Anyway, he avoid himself sudah from touching the babies. And i told him for this 2 weeks ani, we have to keep it in a darker place, right at the corner there and got to keep the noise down. Then, if the babbies survive, then we will asing kan them and see what to do next. He agreed.
Posted by zura at 11:10 PM